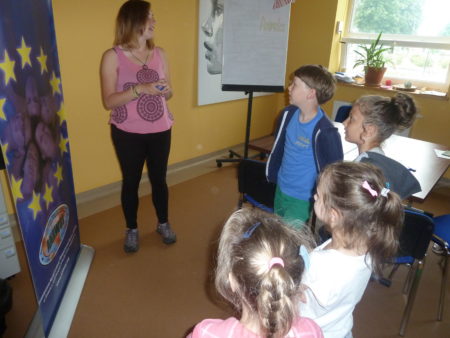 This year we had the pleasure to host two volunteers, Maria from Romania and Cristina from Spain, participants of the project “CREducation” which was co-financed by the European Union under the ERASMUS+ program.

Volunteers were invited to a project in Poland through the Association of International and Intercultural Exchange (ANAWOJ) in co-operation with the Social Affairs Service of the University of Salamanca, who acted as a sending organization.

Maria and Cristina were involved in many and varied tasks; helping ANAWOJ in the implementation of educational projects; regular meetings in local schools which were promoting the ideas of tolerance and voluntary work; preparation of performances and workshops during the winter holiday; and an initiative for group session board games which was particularly successful. In the local Social Centre each week 6-12 people aged 6 to 18 year were meeting to spend time together. Our volunteers were also involved in teaching foreign languages, with Cristina teaching Spanish to children and youngsters, and Maria guiding a discussion group in English for high school students.

The local Club of Active Residents also organized a series of culinary workshops. The participants had the opportunity to learn about marvellous recipes from Spanish, Romanian and Polish cuisine, and the famous Spanish ‘Tortilla de Patatas’ and traditional Romanian ‘Mamaliga’ were sampled, with he volunteers learning how to cook  Polish delicacies: red borscht, potato pancakes and cabbage dumplings.

The CREducation project had a positive impact not only for volunteers, but also influenced the local community as well as children and youth from Michałowo. While actively participating in the meetings the young people had the opportunity to broaden their horizons. There was much discussion of cultural differences, differing and similar views and values. At these gatherings people could practice speaking English, which helped to break the language barriers. Since becoming acquainted with the idea of European volunteering, already one of our school graduates has been inspired and motivated to venture to Spain for two months of European Voluntary Service!

Meetings between volunteers from afar and small communities are always a natural way to open up to the world for both sides, and in our opinion this is one of the main aims of this project. The visitor being immersed in the new environment begins to adapt to and adopt the way of life of the place and people, and in turn can be a source of new ideas for their hosts. Gradually common stereotypes are challenged and tolerance grows. It shows that in ‘otherness’ there is a value that is not always understood, but it should be respected. It displays that we all have similar dreams and challenges and that, despite the differences, there are more things that connect us than divide us, when we can embrace the truth.

During the nine 9 months of the project, so much occurred that it would do the events a disservice to attempt to describe Maria and Cristina’s stay in a handful of sentences. Their time spent in Michałowo had a profound impact on our volunteers and the young people who were learning about their respective countries, languages and cultures. Achieving independence, gaining new perspectives, clarity and confidence in their lives and career paths; may these valuable experiences charm their years to come.

We are grateful for both project participants and our partners for their prevailing  involvement in this project. And we sincerely hope that on the basis of these positive experiences, new co-operation and actions will arise in the future.